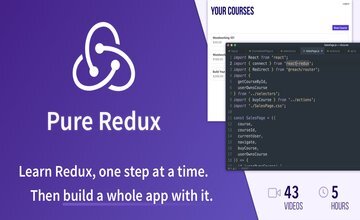 In the last lesson you saw how to add Redux to a React app.

Now, you get to try it yourself!

Remember: doing these little exercises will help you be able to code on your own later on. Don’t skip! (even if it feels really easy)

Clone this Github repo or open it in CodeSandbox.

It’s a plain React app displaying a “Room” with a lightswitch. Clicking the button toggles the state, which turns the light on and off.

It has no Redux-related code yet, and everything is in one file – a subtle difference from the example, but one that I think you can handle

Your task is to add Redux to this app, and move the lightswitch state out of the React component and into Redux.

Once you’re done, clicking the button should dispatch an action, and the reducer should return the updated lightswitch state.

No tricks here: the code should end up looking very similar to the code from the lesson you just watched

You can leave everything in one file, or split out the Room component into its own file if you like.

If you do leave it all in index.js, you won’t need to export the connected Room component. Instead, save it in a separate variable, like const ConnectedRoom = connect(mapStateToProps)(Room) – and update the ReactDOM.render call to render the ConnectedRoom.

Here’s a solution to this exercise. (make sure to try it yourself first!)

Now that you’ve learned about action creators, action constants, and mapDispatchToProps, it’s time to practice them on your own!

In this exercise you’re going to build a Step Counter. (see what I did there). It’s just like a Fitbit, except entirely manual. 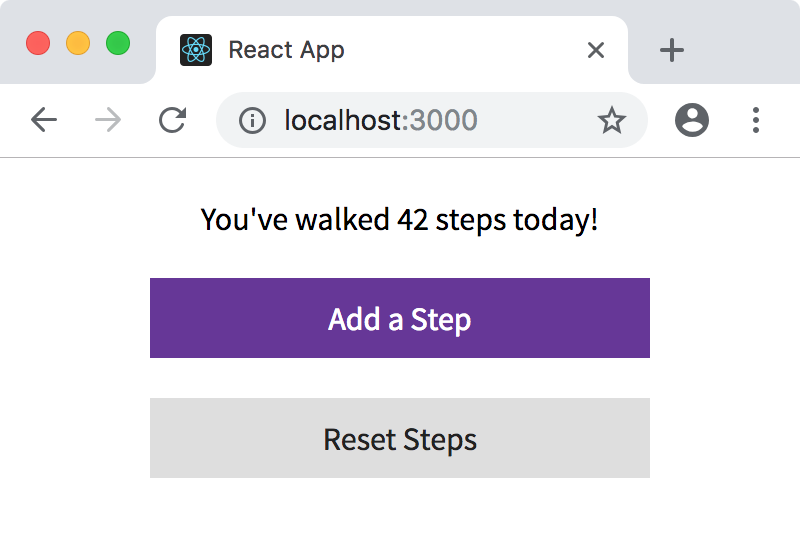 We’ll start from a blank project this time.

My goals for you here are to get more experience creating a React + Redux app from scratch, creating action constants & creators, and using mapDispatchToProps.

Feel free to ignore the CSS! I just wanted to make the screenshot look nice

Add Redux to the project as you’ve done before.

There’s just one component here: the StepCounter. It should have 2 buttons, one “Add Step” and one “Reset Steps”, as shown above. Clicking “Add Step” should increment the step counter by 1, and “Reset Steps” should clear it. (think: how many actions will you need?)

For each action, create an action constant and an action creator. Use mapDispatchToProps to pass the actions in as props to the StepCounter component. Try out the object form of mapDispatch as well as the function form.

You can break the project up into files if you like, or keep it all in one file. If you want a suggestion, try for an index.js with the createStore + reducer, a StepCounter.js with the component and any necessary connect() setup, and an actions.js with the actions (don’t forget to export them!).

If you want to make it pretty, go for it. But it’s fine to leave it unstyled like this: 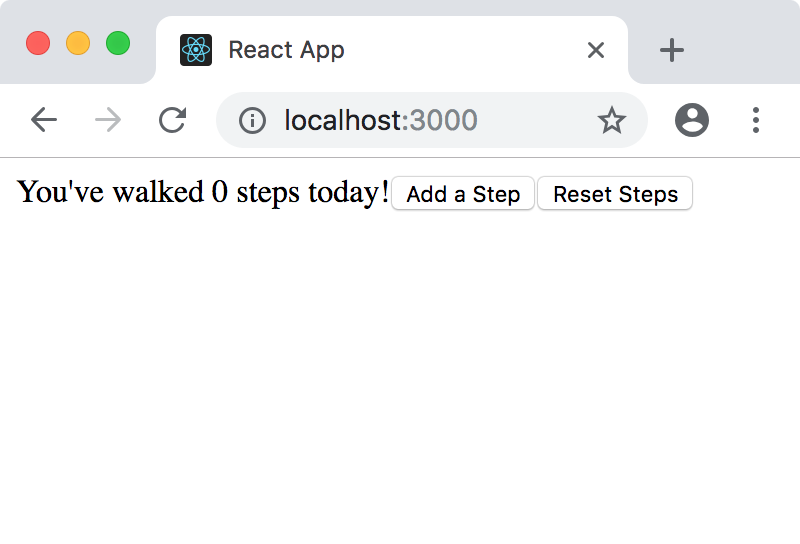 “Did I do it right?”
It’s natural to wonder if you’re doing it “correctly.” Whether you named things right, or used the right patterns, or put things in the right files…

Right now though, push that feeling aside and instead, ask yourself: “does it work?”
If you have a working step counter, where the data is stored in Redux (not in React state), then it is a success. Move on

Don’t stress about perfect project structure or perfect naming conventions or other minutiae right now. Get the concepts solid first, then we’ll worry about tuning the other bits.

Here is a solution to this exercise. (try it yourself first!)

In these exercises you’ll write a few reducers of your own. For each one, break down the problem into:

The aim of this exercise is to practice thinking about state shape, actions, and reducers. The only requirement is that you write a standalone reducer that handles the appropriate actions – but if you want to go one step further and turn these into working apps, that’s even better.

Traffic Light
If you drive, you’ve likely encountered one of these in the wild. It’s essentially a fancy state machine on a timer.

Design the state shape for the traffic light, and the action(s) to control it. 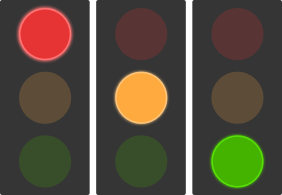 Bonus: build a React + Redux app that displays a traffic light and allows you to advance it by clicking a button.

Extra bonus: advance the light on a timer instead of with a button. Will you set up the timer inside a component, or outside? Why?

Super bonus: extend your app to display two traffic lights, and write the reducer to ensure that the lights are never conflicting. In other words, avoid deadlocks or traffic collisions

Pretend the clock is frozen in time, and design your state + actions + reducer for the use case of setting the clock.

Bonus: build a React + Redux app that displays a clock, lets you set the time, and increments the values as time passes.

User Session
One of the prime use cases of Redux is storing user session data. This might seem like a fancy thing on the surface, but when you look at the Redux side of things, you only need to think about two events: the user logged in , and the user logged out . 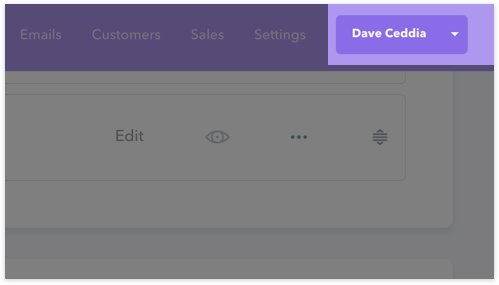 Imagine that your user info comes back from the server and it looks like this:

Decide on a state shape to store this user info. Then write the reducer to handle the actions when the user logs in, and logs out.

Don’t worry about fetching data, or performing any real login calls right now. Copy-paste the fake user data above and pretend that it came from a server

This might seem like a silly fake exercise, but it’s actually half the battle. You’ll need code like this in order to handle user logins in your app; figuring it out in isolation like this is easier than taking on the whole problem at once.

Here are solutions to these exercises.

Now that you know how to perform immutable updates on arrays, it’s time to practice that skill!

Use that array as your initial state .

Now that you know how to update objects in an immutable way, work through these exercises to hone your skills.

Copy this object into your code:

How To Do These

You can write a reducer that handles each of these as an action, and dispatch actions through it. That’s the Redux-y way.

Immutable update code works just as well outside Redux though, so if you’d prefer, you can write these each as a series of transformations:

Install the Redux DevTools in your browser from the official repository.

Then open up this app in CodeSandbox - it’s a bog-standard TODO app that you’ve perhaps seen before.

Open up the Redux DevTools. They won’t be working, because the store hasn’t been configured yet. Set it up like you saw in the lesson , following the link from the Redux DevTools. You might need to Save the CodeSandbox to make the change take effect (don’t worry, it won’t modify the original copy).

Alternatively, try the redux-devtools-extension package - it’s even easier than copy/pasting the window.REDUX_DEVTOOLS_EXTENSION stuff. Learn how to use it here.

Then try a few things in the app:

Bonus: enable the “trace” feature. In the lesson, we saw the Trace tab but did not turn it on. To enable it, pass an object with trace: true into the __REDUX_DEVTOOLS_EXTENSION__ function call like this:

Then save, and close/re-open the Redux DevTools. Perform a few actions, then click on an action and look at the Trace tab. Can you figure out where the action was called from?

You’ve seen a small example of using redux-thunk to fetch some data. Now you’ll get to try using it on your own

Create an app that fetches your local weather from the free MetaWeather API - it doesn’t even need an API key!

The MetaWeather API returns the current weather along with a 5-day forecast, and they even have some images you can use! Their documentation is all on one short page.

Unfortunately the API doesn’t set the CORS header, so requests from browsers get denied. I set up a proxy that’ll set the CORS header for you: https://weather.daveceddia.com - to use it, make your API calls to my server instead of metaweather, e.g.:

Getting the weather is a 2-step process:

So this will require two HTTP calls. (you could also cheat, by hard-coding your location once you figure out the woeid, but where’s the fun in that?

Then, write an app that accepts a location name as input, and calls MetaWeather (twice!) to fetch the weather for that location.

It can look however you want (you don’t even have to style it if you don’t want to!). Roughly speaking, you’ll want a text box, a button, and a display of the weather. Something like this: 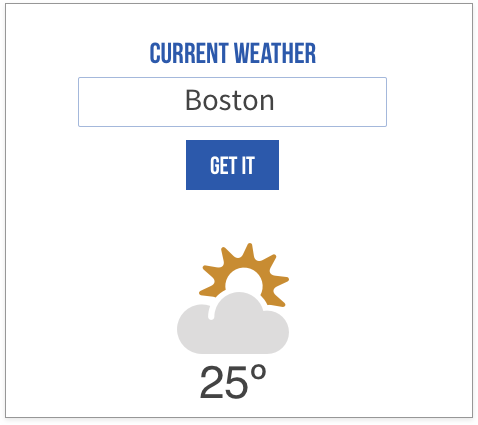 (that uppercase font is Bebas Neue, if you care

Show a loading spinner while the weather is being fetched, and gray out or hide the weather if you change the city name after fetching it.

The exercises below will probably look familiar! Try them out with Immer to compare/contrast with the “long hand” way you’ve already practiced with arrays and objects.

Another feature of immer : you can return the new state from the produce function, just as you would with a regular reducer. Try it out by copy-pasting some existing reducer code (the whole switch/case body) into an Immer produce function – it should work the same. This is great if you have an existing project without Immer but you want to introduce it without having to rewrite all your reducers.

Use this array as your initial state:

Write a reducer that performs each of these in response to an action:

Next, copy this object into your code and use it as the initial state for a new reducer.

Write a reducer that handles each of these as an action:

Using the example from the video as a starting point, add tests for the rest of the actions in the reducer.

Here’s the code. Add your tests alongside the others in reducer.test.js .

Here is a set of action creators.

Write tests for the first 3 (fetchProductsBegin/Success/Failure).

(the last one, fetchProducts, is a thunk action – leave that one untested for now)

Write tests for the fetchProducts thunk action creator in this gist.

Make sure to mock out the fetch function (as we did in the lesson) and write tests for both the SUCCESS and FAILURE codepaths.

In the last lesson we handled the ADD_COURSE_SUCCESS action when a new course is saved to the server.

For this exercise, implement the handling for ADD_COURSE_BEGIN and ADD_COURSE_ERROR. Refer back to the lesson on redux-thunk in Module 1 if you need a reminder of how to handle these actions.

Right now, courses in our system only have a name . It’d be nice if we could set a price on them, too.

Your exercise, then, is to add a price field. This will require:

The json-server API we’re using will automatically handle any fields you pass up. Right now we’re just passing an object like { name: name }, so records only get a name field. If you were to pass { name: name, price: price } then each record would have both fields.

Write a selector that retrieves a course from the store, based on the courseId prop.

HINT: You’ll need to write a selector for all courses before you can write one to pick out a specific course…